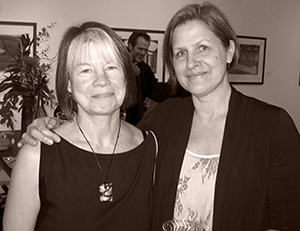 Terry Nelson and Dana Mattson have shared a studio space for over 18 years, and much of the relationship between these two women has been in the company of each others' art. Throughout their time together they happened to notice a particular phenomenon occurring. Similarities in their work would weave unspoken and unintentionally back and forth, in shape, color and form, despite distinct differences in style and technique. This piqued their curiosity.

At the beginning of 2010 Dana and Terry initiated a plan: a one-year exploration of questions of what influences an artist's work: what is unplanned or intentional, what comes from the outside - from nature, the environment, other artists; and what comes from the personal - from dreams, affinities and dialogue. They both agreed to allow each other to be influenced by each other in any way possible.

Terry had already begun a body of work, realist landscapes inspired by her response to the natural world. Dana chose to start from scratch and let her images be unplanned and in dialogue with Terry's work.

Art and nature is an ongoing point of intersection between these two women. Both have a desire to remind the viewer of the rich and multifaceted world that surrounds and holds us. A world to be cherished, preserved and protected. Water, a shared theme, is literally throughout time and myth a source of our continuing existence.

Studio Soup is a result of the visual and written dialogue between two working artists, painting, dreaming, and conversing with the world just under the surface of things.